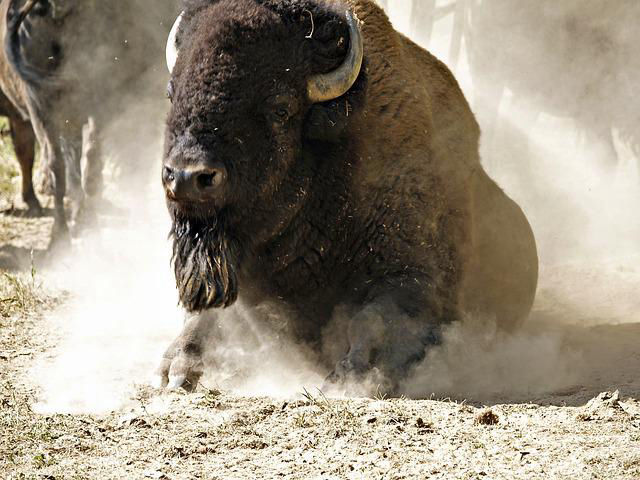 The term "buffalo" is sometimes considered to be a misnomer for this animal, as it is only distantly related to either of the two "true buffalo", the Asian water buffalo and the African buffalo. However, "bison" is a Greek word meaning ox-like animal, while "buffalo" originated with the French fur trappers who called these massive beasts bœufs, meaning ox or bullock—so both names, "bison" and "buffalo", have a similar meaning.

Though the name "bison" might be considered more scientifically correct, as a result of standard usage the name "buffalo" is also considered correct and is listed in many dictionaries as an acceptable name for American buffalo or bison.

So why do we call American bison “buffalo”? There is some speculation that this simply came from Europeans associating them with African and Asian buffalo, giving them the same name. But this seems unlikely as American Bison strongly resemble the European wisent bison, much more so than the African or Asian buffalo. A more likely scenario is that they were named such because the American “buffalo” were primarily prized by Europeans for their hides. “Buffe” or “bufle” were commonly used as names, at that time, for any animal that provided a good hide for buff leather.

Feedback
Please send us your ideas, bug reports, suggestions! Any feedback would be appreciated.